There are many reasons to be excited about mobile phones as a way to distribute cash transfers, such as government payments or NGO cash-for-work programs. First, cash transfers are often sent to groups of people in multiple locations, and it can be easier to reach them via mobile than to bring them together in one place. It is also easier to track payments if they are sent electronically, which can reduce corruption and increase confidence that the right amount of money ends up with the right individuals. A third possible benefit is that relying on a network of mobile money agents who already handle cash will increase security over creating new systems for transporting cash. This was the situation in Haiti, where cash-for-work payments were made on-site at camps, which created a security risk for the bank employees who had to stand with and distribute large amounts of cash in crowded, outdoor locations. For these reasons – the potential to have a more convenient, secure, and traceable method to distribute payments – mobile cash transfers have been attempted in multiple countries from Pakistanto Niger.

Unfortunately, implementation on the ground often proves to be far more difficult than it seems at first glance. The first and most obvious challenge: not everyone has a mobile phone, let alone an account linked to their phone which can accept fund transfers. Despite all of the justified excitement over the rapid growth of mobile phones worldwide, in any given developing country a large minority of people may still not own a phone, and these people are likely the marginalized populations that are often targeted by social cash transfers. In this case, an organization (NGO or government entity) planning to implement such a program has a few choices:

1) Buy everyone phones – Not only is this expensive for the organization or donor, but once you start to give out free phones, there is an incentive for beneficiaries to under-report cell phone ownership  because, well, who doesn’t want a free cell phone?  This isn’t necessary a problem, but it must be taken into account in the planning and budget phases. Any money spent on purchasing and transporting phones is money that cannot be used for transfers themselves, which will decrease either the number of beneficiaries or the amount of funds that each beneficiary receives. Also, the same logistical challenges exist for giving out phones as for handing out cash, since now partners must find a way to acquire and transport phones in addition to organizing beneficiaries for the disbursement of phones. Therefore, this option is more attractive for programs where there will be multiple transfers to the same people over time (read: not one-time disbursements following a humanitarian crisis.)

2) Require everyone to buy phones – The problem here is that the cost of the phone will be a burden on the targeted individuals, who are both deserving of a cash transfer and who have not previously been willing or able to purchase a phone. One option is to create a payment plan where beneficiaries can buy a phone from a certain retailer and then have small payments deducted from their cash receipts until the amount of the phone has been fully paid. The benefits of having people buy their own phone are many, if they can afford it: it is cheaper for the implementing organization, beneficiaries can choose their own phone, and people are more likely to appreciate the phone and utilize it beyond simply receiving their cash if they are paying for it and therefore have a greater sense of ownership.

Even if everyone does have a phone, it is almost guaranteed that they do not all use the same company for their service provider. In this case, in order to send money to an actual mobile account, the organization can go back to options 1 and 2, to provide phones or require everyone to buy a phone (or a SIM, depending on whether the phones are locked) in order to get all beneficiaries using the same provider. However, NGOs with social missions are often hesitant to actively promote the services of one for-profit company over another. In order to avoid this, the organization will have to work with two or three mobile network operators, which will most likely have different payroll systems in place, again creating logistical and financial accounting problems for the implementer and raising the cost of the disbursement. This is currently the only option in Haiti, where both mobile money providers require recipients of funds to register for a mobile money account in order to withdraw funds.

In other countries, organizations can work with a company (such as Mobile Transactions Zambia) to send beneficiaries a mobile voucher, which contains a one-time unique transaction number that the user can redeem for cash at designated agents. In this case, a mobile phone is not necessary – only the transaction number. There are still challenges to this approach:  delivering the transaction number to someone without a cell phone can still create logistical challenges, and the beneficiary must redeem the voucher for the entire sum of the transfer. This latter challenge poses problems for those programs whose obje 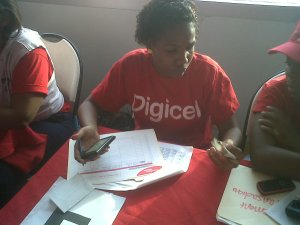 ctive is more than simply to deliver the cash. If there is a savings or financial inclusion objective, then it might be of interest to have all beneficiaries register for account with the ability to store value.

In conclusion, the benefits of security, convenience, and accountability are all very real; however, they cannot be considered without full recognition of the costs and the challenges involved in implementation. The good news is that most of these challenges are highly likely to diminish over time, as cell phone ownership spreads and mobile money services become interconnected. In the meantime, there are other options for reaching people. For example, in Pakistan, the government distributed cash aid to flood victims via prepaid Visa-backed ATM cards. Until cell phones are truly ubiquitous, mobile transfers need to be weighed carefully against other options that may be cheaper or more practical for distributing cash transfers.